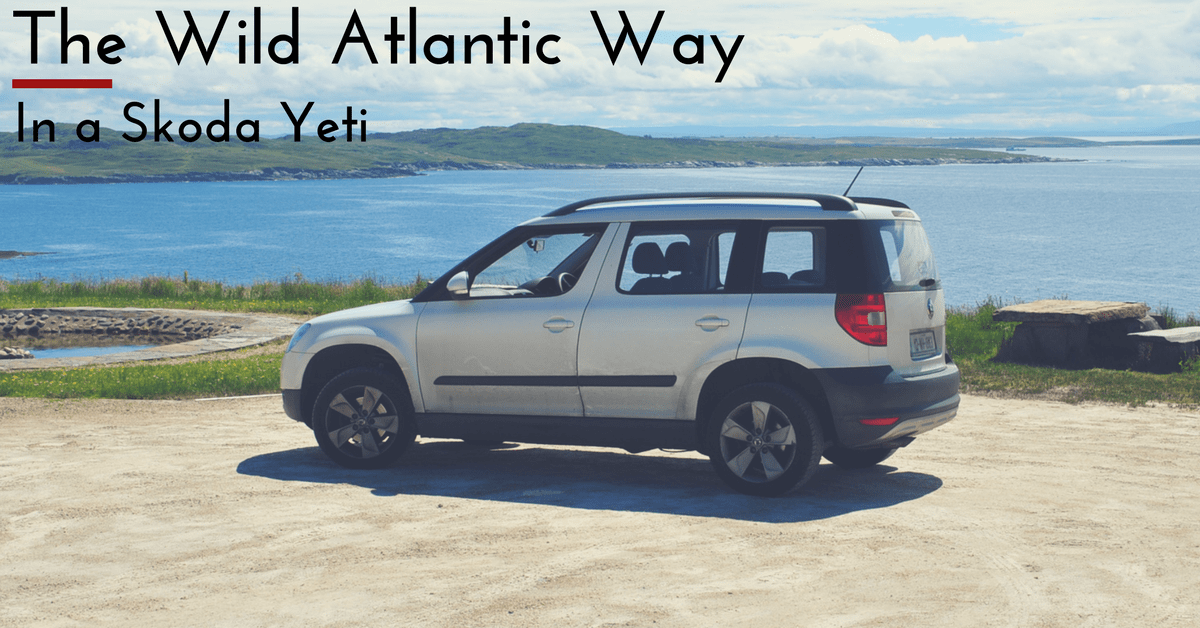 The Wild Atlantic Way in a Skoda Yeti

The Wild Atlantic Way in a Skoda Yeti

In the summer of 2016 myself and my fiancée were planning a summer holiday. All the usual places came to mind, Spain, Portugal, France etc. etc. All seemed fantastic in their own right, but personally I didn’t feel like dealing with the airports and planes and crowds and security. You get the jist.

Why not give the Wild Atlantic Way a go? It’s all the rave don’t you know? It was in its second year as of the summer of 2016 (although I’m almost certain the roads have been there much longer). I also had the fantastic idea of deciding to camp on three of the five nights along the route. It’s something neither of us had ever done. More on this fantastic notion later.

First problem. What car to use? At the time we had an Audi A1 3 door and a Renault Sport Clio 172… 3 door. Not much use for a nearly 1400km road trip, loaded up with camping gear and a few suitcases. At this stage I reverted to a teenager again and asked my parents could I borrow their 2012 Skoda Yeti Eco line with a 1.6 litre diesel engine and 110bhp on tap. The trade-off was agreed, my mother got an Audi A1 for the week and we got the Yeti. Problem one sorted. Perfect for covering the west coast of Ireland in economy, comfort and style. (Depending on who you ask.)

Third problem. We had only five days and we wanted to cover as much as possible without spending too much time on the road. The starting point was decided – Crolly in Donegal. After Crolly it would be on to Westport, then Galway, Kilkee was next and we would finish up in Dingle. 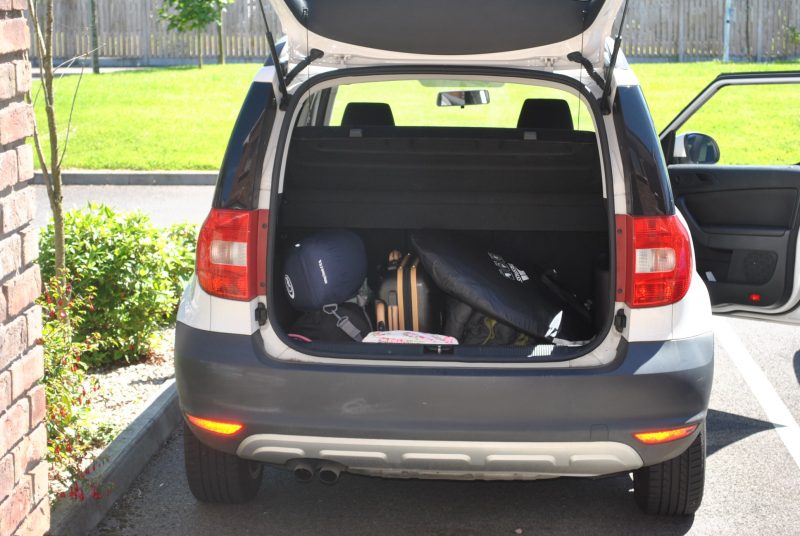 In all the planning we sort of forgot we had to actually get to our starting point on the “Wild Atlantic Way”, as I live in the midlands this involved a four hour drive on rather dull national roads through Longford, Leitrim and Sligo. I won’t bore you with the specific details of the route but the Yeti performed perfectly well on this leg, covering 265km easily. The torquey little 1.6 litre engine provided sufficient overtaking power, was very economical, achieving 50 miles per gallon and I had no complaints of a stiff back, common on those type of journeys. So far so good.

Our accommodation on the first night was chosen to ease us into this camping craic, after that we would be ready for the wilderness. We arrived at Sleepy Hollows Campsite Crolly in the evening under a soft summer rain. As you can see from the picture below an enchanting little cabin greeted us upon our arrival. Or a “shed” as Claire called it. Um, not the best start to my great idea! It was €35 for the night and was within walking distance of a little pub. Can’t really complain about that.

The following morning we were in luck. The sun was shining. In Ireland. In the summer. Can you imagine! Twenty minutes into our first day and we were hit  a very twisty stretch of road and unbeknownst to us we were climbing to the top of the glorious Glengesh Pass. The picture say more than I ever could. Have a look. 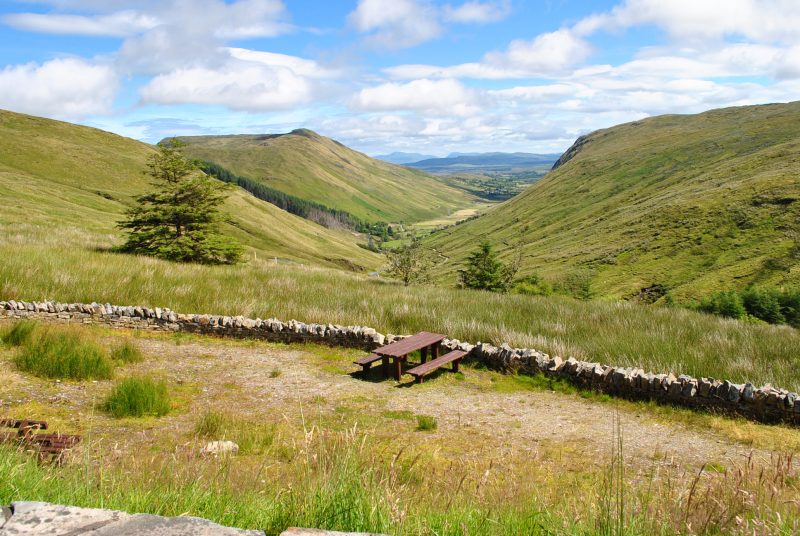 The next part along that route that sticks out in my memory was a small stretch of coast road between Kilcar and Killybegs. There are some breathtaking views along that route. Bundoran was the next milestone,  once again the pictures paint a thousand words. We arrived in Westport around 3 o’clock, and set up our tent in Westport house. This is when it suddenly dawned on us. That is quite a small tent. It’s also just a pop up tent, nobody else had a pop up tent. Most were seven foot tall and probably ten foot wide. They had little porches and windbreakers. One even had fire pit! I may have underestimated my camping skill and knowledge. Ah well. We’re on an adventure. We’ll give it a go and see what happens. The first problem reared its head early in the night. I was too tall for the tent. Should have probably checked that first. I’ll curl up. It will be fine.  About 20 minutes later I found out that Claire is quite claustrophobic, who knew. A full blown panic attack ensued! “I need to get out of here now!” Open the door! The zip is stuck! I can’t. This went on for what felt like 20 minutes (it was probably thirty seconds) but when someone is having a full blown panic attack in a tiny tent time slows down. Finally, I got the door unzipped. “I can’t sleep in that, I’m sleeping in the car!” It was decided, we would find out how good a Skoda Yeti was a caravan. Turns out if you are 5 foot 6 its fine, she slept quite well. Me on the other hand, not so much. I think 30 minutes sleep was about it. At 5a.m. we chucked that stupid  tiny tent in the boot of the Yeti and made swift progress out of Westport House before any of the proper campers could see us and laugh.

A nice early start for day two. On the road at five in the morning with a bit of administration to sort first. We had a hotel booked for Galway but the plan was to camp again in Kilkee. A unanimous decision was agreed upon, we are not cut out for camping and guesthouse was promptly booked for Kilkee. Getting on the road so early was a blessing in disguise, we had the roads to ourselves. Today’s route took in Louisburgh, Delphi, Leenaun, Clifden, Roundstone, Screebe, Barna and finally Galway. We stopped for a visit to Kylemore Abbey. Given that we arrived at 7.30 a.m., it wasn’t actually open but it looked lovely from the outside. Arriving in a surprisingly sunny Galway at lunchtime allowed us to ramble around the city for a few hours and recharge the batteries.

Today was a short trip of only 140 kilometres but the journey crammed in a lot of traditional Irish holiday towns, including Kinvarra, Lisdoonvarna, Doolin, Lahinch, Spanish Point, Doonbeg and Kilkee. We had intended on visiting the Cliffs of Moher but in a rather “Father Ted” moment they were basically full and you would be waiting a very, very long time to see them. Onwards to Kilkee. I must admit I didn’t know a huge amount about Kilkee before arriving but was very plesantly surprised. There is a lovely holiday atmosphere, everyone is very relaxed and the sea food was excellent. I would highly recommend a visit!

Our final day on the Wild Atlantic Way consisted of a 140km journey from Kilkee to Dingle. The first surprise to meet us on the route was the realisation that you can take a car ferry from Killimer to Tarbet across the Shannon estuary. I’ll admit it, I had no idea this existed until we checked the route that morning. You can take the ferry, sit back and relax and take in the beautiful scenery of the Shannon estuary or drive on boring national roads and add 120kms to the journey. Easy decision. As a midlander the novelty of the car ferry was great and I would recommend it if you are on that route. I’m sure for regular commuters the novelty has long worn off. The coastal route from Tarbet to Tralee is a tonic for the eyes, even on a rainy summers day. We reached Tralee at mid-day and stopped for lunch before taking on the Conor Pass to Dingle.

Unsurprisingly, the roads were filled with tourists in rented cars that seemed paralyzed by the surprise of narrow roads, steep drops and soupy fog that presented itself on the pass.  A top speed of 15 kilometres an hour was the order of the day. The video below gives a better sense of it than I ever could here. A rainy night in Dingle was followed the next day by a 300km trip home.

So how did the Yeti perform on the Wild Atlantic Way?

Very well indeed. The Yeti covers kilometres very comfortably, we had it full of luggage, a (tiny) tent and food, and space was never an issue. If you were carrying more than four people at a time it might struggle to keep everyone comfortable but in this situation it was perfect. You can even sleep in it in relative comfort, as long as you are small enough. When the roads got a bit more twisty, the Yeti was adequate. The “fun factor” wasn’t particularly high but it was enjoyable and it never felt out of it’s depth on the more interesting back roads. Fuel economy is where the Yeti really excelled on this trip. I reset the computer upon leaving and at the end of the journey it indicated a fuel economy of 55 miles per gallon over the almost 900 mile journey. (Photographic proof below) Even if we consider the on board computer to be 10% ambitious a consumption rate of 50 miles per gallon is very impressive. 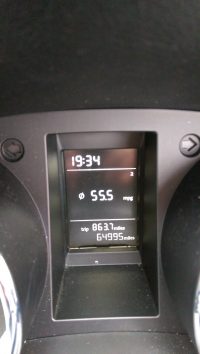 All in all the Wild Atlantic Way is a magnificent trip and I would highly recommended it to anyone considering it for their next holiday. Part of me can’t help but wonder what it would be like on a wild day in November with a proper sports car, I might have to try it again next winter.

About the Author: Anthony Murphy